If you couldn't tell, I'm rather obsessed with Le Klint, that danish modern lighting company responsible for my absolute favorite modern light - that dollop of whipped cream, the Le Klint 172 pendant light (I've blogged about it a couple of times).

While reading checking out Apartment Therapy the other day, I learned that they are bringing back an old classic - the Joker pendant light! Originally designed by Christian Ræder in 1970, this piece won first prize at the Scandinavian Lighting Fair that same year!

Visibly inspired by Batman, this piece is a visual stunner! In the late 60s and early 70s, DC Comics revamped Batman, giving him a new look and more serious story lines, in an effort to distance itself from the very popular but campy "Batman" TV series (1966 - 1968) starring Adam West. The Joker Pendant came out around the same time this new Batman made his debut on news stands, but whether that served as Ræder's inspiration, I am not certain. Also, it's a mystery to me why this lamp was called "Joker" and not "Batman" - perhaps copyright issues? 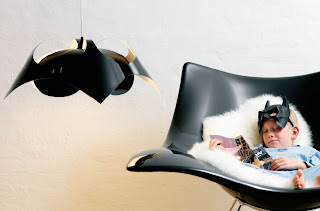 At any rate, each Joker Pendant is assembled by hand, folding "out like a beautiful flower sculpture." A must have for Batman fanatics and modern design enthusiasts alike, this piece was supposedly re-launched in October of 2008 (although I can't find it online anywhere). It's available in both a black on white and white on white version. For more information on purchasing this light, contact Le Klint. Lights out until next time! - Via Apartment Therapy and Le Klint 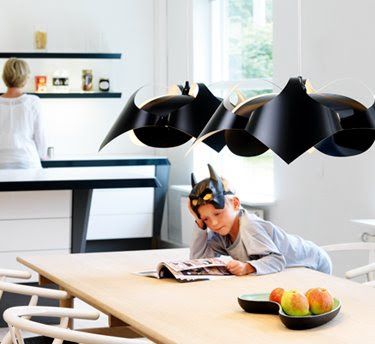